TV Shows Sherlock
Who are we and why are we making Kinorium... 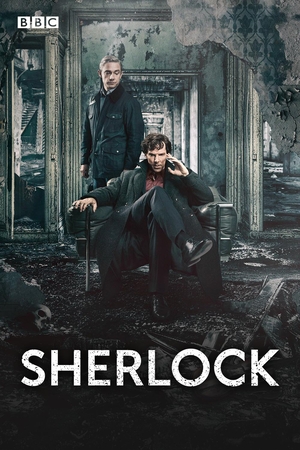 A Study in Pink

Unlocking Sherlock – The Making Of 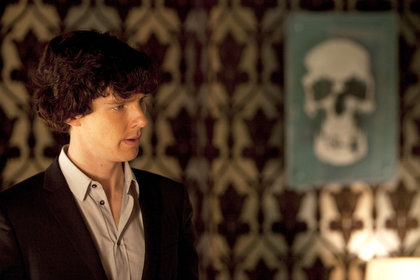 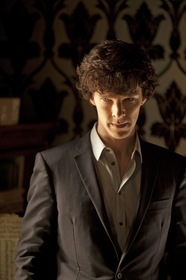 Sherlock depicts "consulting detective" Sherlock Holmes (Benedict Cumberbatch) solving various mysteries in modern-day London. Holmes is assisted by his flatmate and friend, Dr John Watson (Martin Freeman), who has returned from military service in Afghanistan with the Royal Army Medical Corps. Although Metropolitan Police Service Detective Inspector Greg Lestrade (Rupert Graves) and others are suspicious of Holmes at first, over time, his exceptional intellect and bold powers of observation persuade them of his value. In part through Watson's blog documenting their adventures, Holmes becomes a reluctant celebrity with the press reporting on his cases and eccentric personal life. Both ordinary people and the British government ask for his help.

The Triumph of Sherlock Holmes 1935

Adventures of Sherlock Holmes 1905
All connections

Related Titles There are no related titles yet, but you can add them:

If the proof of quality is that a show leaves you craving more, «Sherlock» has quality to burn.

There may be hashtags, blogs and motorbikes, but the spirit remains in keeping. I think Sir Arthur would approve, enjoy it too. Hard not to re...

Each week, the series takes on a Holmes classic, updates it, turns it on its ear and leaves you breathless.

Sherlock is a Rolls-Royce of a popular entertainment, beautifully engineered and beautifully finished. The doors close with a perfect thunk ev...

Thank goodness for flashbacks, because we also finally get to see Mr. Cumberbatch kiss a woman in a way that will leave no doubt about Sherlock&rsq...

As is often the case with Sherlock, the best bits are less about plot and more about people.

«Sherlock» is the rare classic drama that not only survives being dressed up with a new suit, but looks darn good in it.

This is superior sleuth TV.

In «The Truth," the Japanese writer-director Hirokazu Kore-eda wittily toys with Deneuve’s persona, its layers and meanings.

The writers have done a splendid job of keeping the audience off-balance while weaving in elements of the Holmes mythology.

The show deserves to do well because it’s so bloody good – smart, whimsical and occasionally laugh-out-loud funny, finding fresh, distin...

A modern-dress Conan Doyle that crackles with superb writing, brilliant performances and snappy direction, and does it all while somehow managing t...

Sherlock selects plot elements and incidental details from the original stories and mixes and mashes them together, adding new ingredients to taste.

If Sherlock has anything to offer, though, it must lie in escapism.

The stories are complex and contemporary, with references to a remembered past.

This Holmes update’s second season continues to be both clever and classic.

Moffat’s greatest accomplishment may be all the things he didn’t do. His Sherlock Holmes is the most relevant and compelling crime-solv...

The series is a comment on Holmes as much as it is an adventure in which he stars. Knowingness is one of the things it wants to share with you.

Though scant on actual crime, the show remains a televisual switchback, crammed with devious twists and delicious bons mots.

How is it possible that a show based on a set of stories that began in the 19th century could be the freshest detective show on television?

A Scandal in Belgravia makes for a rollicking return to the Sherlock franchise and the writing, direction and performances are so sharp you ca...

Though it’s impossible for Mark Gatiss and Steven Moffat’s sleuth update to live up to its «best telly ever!» reviews, even die-hard Co...

A paltry number of things on television are as exciting as a new season of Sherlock – and if you haven’t seen the first two tragica...

Happily, though it’s not the series' strongest script, the two fine actors can still extract every nuance from it.

Cumberbatch stalks Baker Street like a Danish prince with a decisive streak.

One of the most dazzling confections on TV.

The result was 90 minutes of television so richly enjoyable that I’m already beginning to wonder if we’ll see anything better...

Strikes a perfect and delicious balance among comedy, pathos, murder, and mystery.

You do not have to be a Holmes expert to go completely gaga over the new season. All you need is appreciation of perfection.

The Empty Hearse, with its heady revelations and the promise of future mayhem via a new nemesis for Sherlock and John, manages to create an au...

Holmes and Watson are such enduring characters, and these versions written and played so well.

The smart dialogue and warm performances – even Holmes has a discernible beating heart, or perhaps two – keep ice from forming on th...

All right, the dangling ending was corny, Moriarty unveiled was just silly and I could do without the nudge-nudge hints of gay goings-on, but...

Sherlock’s certainly among the most interesting people one could know, the cleverest, and maybe the smartest.

How great to see Jones let rip after so many down-at-heel roles; even his toothy leer, which reminded me of Alec Guinness’s in The Ladykiller...

Sherlock is a wonderful series. Just thinking about it makes me smile.

Not many shows can handle such swift and complete shifts in tone as this, but Sherlock makes them look positively elementary.

The Empty Hearse, which witnessed the return of Sherlock Holmes to the world of the living, was an exercise in fan service, but that’s not en...

In the meantime, watching Sherlock is like dropping in on old friends who are as smart and sarcastic as ever but don’t seem to have as much j...

Steven Moffat and Mark Gatiss have created something of unusual brilliance … The best hour and a half of television so far this year.

the reinvention is so smart and funny and thrilling that I hope we get another, longer season before too long

The third season is looser, funnier, more emotional and also significantly less logical than what has come before.

If Sherlock were to continue, its problems would only grow, while its virtues would stay the same.

Thanks to the stars, the wit of the writing and a few clever tricks, the show remains a joy.

In the orderly world of Sherlock, the central male characters wield their genius as weapons as the women stand by to admire or enable them.

Sherlock worked because it was having fun. It also let down the po-faced pretence that the suffocating abundance of TV detective shows often labour...

Energetic, smart, finely polished and just a little pleased with itself, it’s quintessential Sherlock. The boys are back in town.

Sherlock demonstrates, bringing Holmes and Watson into the 21st century ought to have been, well, elementary.

Even better than the first time.

In its third season, Sherlock﻿ at last settles into its own assured rhythm.

Returns with seduction through deduction intact.

It’s a jolly enough episode, but not as thrillingly stylish as some past adventures.

Sherlock proves to be a fun and exhilarating TV experience.

The most unabashedly entertaining new show of the season.

Tale of the Nine Tailed Gumihodyeon
7.7

Attack on Titan Shingeki no Kyojin
7.5